The Rhode Island Innovation Hub (iHub), a startup incubator and accelerator to be launched through a partnership among Brown University, the University of Rhode Island (URI) and two established accelerators, has been selected one of the state’s new “innovation campuses.”

At a Tuesday, Dec. 18, event on the URI campus, Rhode Island Gov. Gina Raimondo announced iHub as one of three innovation campus proposals to be funded via a $20 million bond issue approved by state voters in 2016. The iHub partnership will receive $2.5 million to help establish a 5,000-square-foot incubator space in Providence’s Jewelry District.

"These three innovation campuses will strengthen our economy and position Rhode Island to lead a new industrial revolution in advanced industries," Raimondo said. "Not only will these projects result in hundreds of good-paying high-tech jobs. [they] will also ensure that Rhode Islanders are set up to compete for those jobs."

University President Christina Paxson said the addition of iHub will complement investments by Brown and other academic and industry partners in the Jewelry District, continuing the transformation of the former manufacturing neighborhood into a hub for technology transfer, entrepreneurship and economic innovation. Brown’s recent investments there include the opening of South Street Landing, a space now shared by Brown, URI and Rhode Island College. Just up the street, Brown’s School of Professional Studies will be an anchor tenant in the Innovation Center, a project being developed by Wexford Science & Technology that will also provide space for Johnson & Johnson and the Cambridge Innovation Center.

“We are excited to move forward with the University of Rhode Island and other partners in launching iHub, which will create new opportunities for collaborative ventures among entrepreneurs, industry and university research teams,” Paxson said. “By convening world-class startup accelerators IBM Alpha Zone and MassChallenge under one roof, iHub will amplify the innovation and discovery that continues to incubate in the Jewelry District.”

“iHub is about creating a critical innovation density,” said Daniel Behr, executive director of Brown’s Office of Industry Engagement and Commercial Venturing (IECV). “We want to maximize collisions between people interested in innovation and entrepreneurship, and iHub will be a bit like a docking station where individuals and programs that support innovation can hook into to make those collisions happen.”

Over the next decade, iHub partners anticipate supporting several hundred startups and attracting 20 to 50 corporate sponsors. If just 10 percent of the ventures that iHub supports succeed in the long term, it would produce tens of millions of dollars in new economic revenue and hundreds of jobs, Behr said.

The two iHub accelerator partners, IBM Alpha Zone and MassChallenge, have strong track records of fostering successful ventures, he added. Startups working with MassChallenge have created more than 80,000 jobs over the past eight years. And IBM Alpha Zone is one of the top accelerators in its home country of Israel, with more than 400 startups applying to be part of their program every year.

“Giving these top accelerators a footprint in Rhode Island will be a tremendous boon for the economy in Providence and beyond,” Behr said.

In partnership with Brown’s Nelson Center for Entrepreneurship and other partners, the iHub space will also host conferences and events along with educational workshops and bootcamps aimed at expanding technical, business and entrepreneurial fluency in the region.

Behr said the iHub partners will soon begin a search for an executive director in the hope of having operations up and running by mid-2019.

Brown’s participation in iHub is part of Brown and the Innovation Economy, an initiative launched by Brown Provost Richard Locke aimed at expanding the University’s economic impact. In addition to iHub, the initiative includes grants for student startups, an expansion of Brown Biomedical Innovations and other programs. 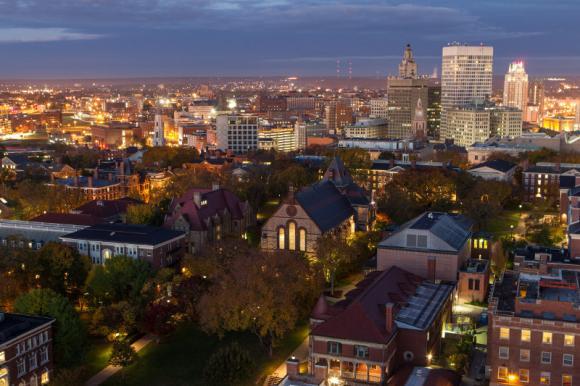 Want to get notified whenever we write about Brown University ?

Sign-up Next time we write about Brown University, we'll email you a link to the story. You may edit your settings or unsubscribe at any time.